Die five times at the boss

The pilot of the Spaceheart. He is the right hand and best friend to Pinkyy. He flies the Spaceheart at top speeds and through tight corners just to see his friends buckle up their seatbelts! He isn't the tidiest guy. Ace also had a rough childhood and has pretty low self-esteem as a result.

Ace is not as brave as the other Hunters, but this can be an advantage as he often comes up with ingenious plans.

He and Pinkyy grew up together on the planet Anubis-3. They made a living out of collecting scrap from the Ducans, and eventually, with the help of their new friends Biu and Raff, were able to put together their own ship, the "Spaceheart". 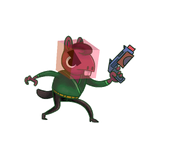 Ace's jetpack icon
Add a photo to this gallery
Retrieved from "https://relic-hunters-series.fandom.com/wiki/Ace?oldid=449"
Community content is available under CC-BY-SA unless otherwise noted.